I've given three oral presentations over the last weeks of finals and somehow managed to finagle them all to be about food.  Sort of telling, don't you think?
Naturally, the easy-bake lifestyle has been somewhat trying at times for someone so obsédé with all things edible, but no experience has been quite as painful and demoralizing as sitting in front of the toaster for ten hours this weekend as I put cookies in, two by two. (This process wouldn't have taken quite so long had nearly half the cookies not come out too unevenly baked and oddly shaped for public consumption.)
However! The kitchen itch can be overwhelming at times, and the debut of the holiday season necessitated some serious home baking, proper oven or no. (That, and I was sort of obligated:  I'd  signed myself up for The Great Food Blogger Cookie Swap, back when I had access to kitchen facilities.  Oops.)
What began as a rather stressful affair however, soon turned into something else.  After hours of throwing blackened cookies into the reject pile, I selected three dozen nearly perfect Cardamom Sugar Cookies to send, all wrapped up in brown paper packages, to the community of fellow bloggers here in France.  Thirty-eight almost round toaster oven cookies was quite a feat, I must say, and it only got even more satisfying when, several days later, the mail lady began ringing the doorbell and bringing me boxes of cookies in return! 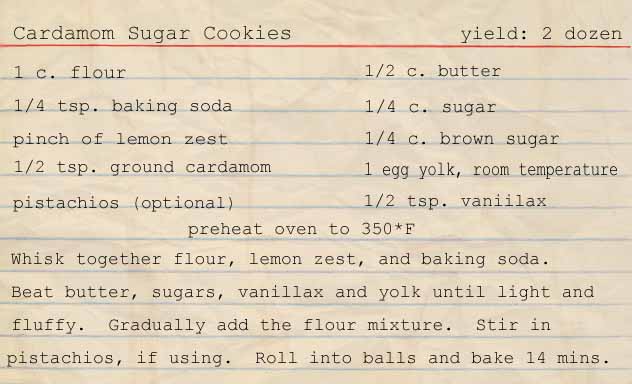 With the help of Hannah and Tsoleene, these wonderful boxes of Christmas Spice Shortbread, French Biscuits, and Chocolate Covered Flake Cookies quickly disappeared, and so the yuletide spirit settled on our little apartment, little 2ft. Christmas tree and all.

Thanks to Julie and Lindsay for putting on The Great Food Blogger Cookie Swap!
It was delicious!